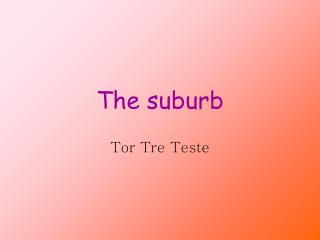 The suburb. Tor Tre Teste. The park…. is perfect for outdoor sports. Many animals live in the park . ducks. turtles. Ancient ruins . In our neighborhood there is an ancient Roman aqueduct. The church:. Suburb village style - . johan f. hoorn, 2002. design trade-off is it possible to have a few prefab components and yet

Banaswadi: Upcoming Residential Realty Suburb - Banaswadi is situated in the north east side of bengaluru, at a distance

Nizampet: A Rapidly Developing Suburb - Nizampet is one of the fastest developing suburbs situated at quthbullapur

Why Should You Invest in Zirakpur Suburb? - While there has been no dearth of properties in the tricity, searching for an

Which suburb is best for you to live in? - . is there good public transportation – buses , trains ? to find out you

Buy an apartment in sarjapur road, the most flourishing suburb in bangalore - Http://avhniabode.com/lotus-palace/ - avhni