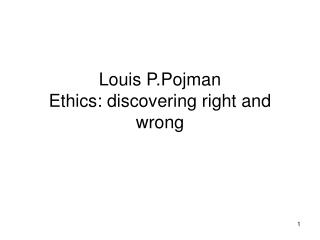 Ethics - . what is “ethics”?. branch of philosophy that deals with issues of right and wrong. concerned with moral

Ethics, Cheating and Plagiarism - Overview. ethics and moralscheating example of cheatingplagiarismexample of

Ethics - . what is it, why is it relevant to hci, why is it important?. what is ethics?. right and wrong behaviour

Environmental Ethics The Discipline of Ethics For syllabus and course resources, go to religionandnature - The discipline

Ethics in Early Childhood Education - Barriers to studying ethics . a tendency to view ethics as something inherent

CODE OF ETHICS - . ethics is the study of right and wrong, based on moral law. . historical development of the medical

Welcome to Wood - . introductions. your 6th grade teacher team!. the wood way… bettering the learning of ourselves and

Business Ethics - . sports &amp; entertainment marketing. do ethics count?. ethics are a system of deciding what is

Ethics in engineering - . lecture 1/4. what is meant by ethics?.

ETHICS - . its more exciting than it sounds. what is ethics?. a branch of philosophy that involves systematizing,

Ethics and Morals - . hre 40 unit 4 mr. carney. morality and ethics. morality is understanding the distinction between

Ethics as AoK - . ethics as aok. “i cannot see how to refute the arguments for the subjectivity of ethical values, but

Ethics - . categorical imperative/deontology. certain actions are always wrong, regardless of circumstances of individual

Ethics - Http://www.holisticeducator.com/conscience-thumb.jpg. don’t be a meany . ethics . what is “ethics”?.

Strategy and Ethics - . ethics involves notions of right and wrong fair and unfair moral and immoral business ethics is

CHAPTER 2 Ethics and Professional Responsibility - . business ethics. ethics can be defined as the study of what

HT06.03 - Ethics. ht06.03. ethics. a set of principles relating to what is morally right or wrong. ethics provide hcw’s