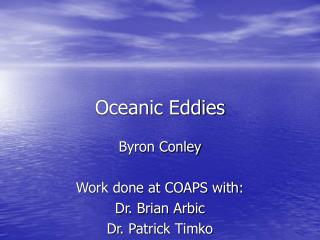 Oceanic Eddies. Byron Conley Work done at COAPS with: Dr. Brian Arbic Dr. Patrick Timko. Outline. I will address our goal: to use eddy tracks to explain persistent signals Clarify relevant concepts Introduce the previous work that has led to our project Describe our work Oceanic Absorption - . in this activity, you will conduct an experiment to learn about the method of oceanic absorption

Oceanic Nekton - . nekton --- those organisms that have developed powers of locomotion so that they are not at the mercy

Oceanic Jeopardy ! - . oceanic jeopardy !. how did the crew of the hms challenger map the ocean floor?. by lowering a

Oceanic Zone - . oceanic zone – the ocean not over the continental shelves. stratified over the abyssal plain @

Oceanic Nekton - . nekton --- those organisms that have developed powers of locomotion so that they are not at the mercy

Oceanic Tides - . the heartbeat of the ocean. introduction. tides are one of the most obvious features of the oceans.

OCEANIC Lithosphere - . where are the oceans?. predict : what percent of the earth is covered in water? what percent is