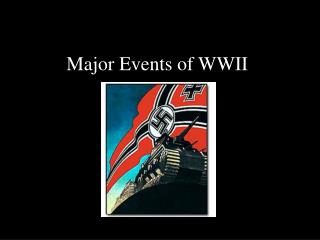 Major Events of WWII. 10 Most Significant Events of WWII. Consulting p. 476-513, make a list of 10 events that you feel are the most significant in the history of WWII. Then choose your TOP 5 and list them in emphatic order, with #1 being the most important. EVENTS OF WWII - . years of crisis. operation sea lion. german plan to take over britain they were going to land 25

Major Causes of WWII - . treaty of versailles rise of italian fascism rise of hitler and the nazi party great depression

Major Events of WWII and Changes in American Policy - . central themes. as conflict grew in europe and asia, american

Major Battles of WWII - . battle of britain . turning point of the war first major battle to be fought entirely with air

Major Battles of WWII - . the war in europe. although japanese bombed pearl harbor fdr felt that americans needed to

Major Causes of WWII - . treaty of versailles rise of italian fascism rise of hitler and the nazi party great depression

Key Events of WWII - . a quick review of the big picture. question #1. name 4 main causes of wwii…. 4 causes. treaty of

Top 15 Events of WWII - . by justin, eric, dan. 15-rationing. rationing of crops and materials allowed the economy to