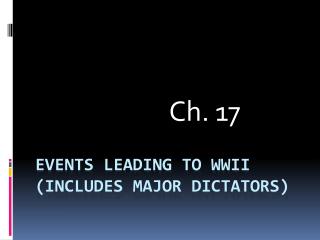 Ch. 17 . Events leading to wwii (includes major dictators). Europe after WWI. WWI left every major European country nearly bankrupt Only the U.S. & Japan came out of WWI in better financial shape than before (Why?) Neither had been a wartime battlefield. Germany after WWI. The Rise of Dictators and WWII - . 24.1: steps to war. the rise of dictators. dictators (absolute rulers) seized power in

The Road to WWII - . 1933: london economic conference: 66 nations met to figure out how to fight the depression; fdr did

WWII and War on the Home Front - . miss england ssush19: the student will identify the origins, major developments, and

WWII is coming fast… - . the rise of dictators after wwi. the treaty of versailles wasn’t fair… the world-wide

WWII - . dictators of the world. joseph stalin leader of the soviet union, communist totalitarianism—government that

Events Leading Up to U.S. Involvement in WWII - . u.s. history. world war i ( a.k.a the great war and the war to end all