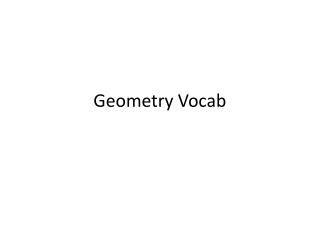 Geometry Vocab. Inductive reasoning. The process of reasoning that a rule or statement is true because specific cases are true. Conjecture. A statement that is believed to be true. Expression. A mathematical phrase that contains operations, numbers, and/or variables. Constant. Geometry Vocab - . inductive reasoning. the process of reasoning that a rule or statement is true because specific cases

Vocab - . julius caesar- named dictator of rome. he was later killed by the senate because they feared his power. first

Vocab - . refraction. refracted ray. the change in direction of light as it passes from one material to another. bend

Vocab. - Vocab. hypothesis- if and then statement making an educated guess neutron- has a neutral charge and is found in

Vocab - . by: kaelyn clater . ardent. having , expressive of, or characterized by intense feeling-- definition she is