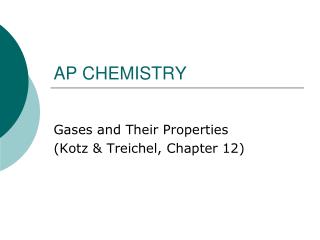 AP CHEMISTRY. Gases and Their Properties (Kotz & Treichel, Chapter 12). 12.1 The Properties of Gases. Gas behavior is well-understood – we can usually apply simple mathematical models. Only 4 quantities are needed to define the state of a gas: The quantity of the gas, in moles (mol) Organic Chemistry - . c hemistry. chemistry is the study of the substances, specially their structure, properties,

Week 13 Chemistry - . nuclear chemistry. write the learning target. warm up: 4 minutes. stay in your own seat. you should

Organic Chemistry - . what do we mean by “organic” chemistry? what do the following things below have in common?.