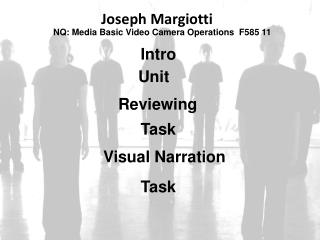 NQ Clarifier - -guidelines for acquiring the ideal air purifier for your

Basic Communication Operations - . based on chapter 4 of introduction to parallel computing by ananth grama, anshul

Video Camera Technique - . creating the illusion of 3 dimensions in a 2-d medium. focus . zoom in on object/subject as

Basic Video Camera Use - . format: mini-dv mini-dv is “digital video” on very small videotapes. because they record a

Basic Camera Work - . the shot. each continuous shooting period, from the moment the camera starts shooting until it