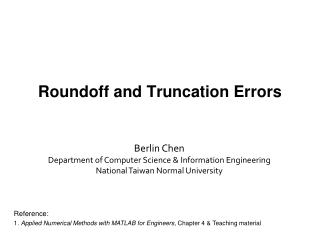 Non-sampling errors - . (session 20). learning objectives. by the end of this session, you will be able to describe the

Errors in Reasoning - . goal: identify common types of errors and avoid them. many of these come up in the wasi a major

Roundoff and truncation errors - . accuracy and precision. accuracy refers to how closely a computed or measured value

Errors and Uncertainties - . in measurements and in calculations. types of experimental errors:. random errors : a result

Quantization - . quantization. signal x(t) is quantized in a finite number of levels assume that x is in the dynamic