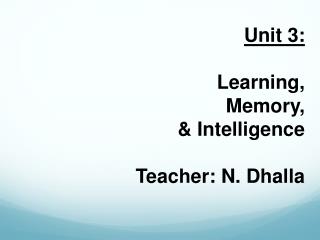 Cognition: Memory How Does your Memory Work 1 of 5 - BBC Horizon Documentary.flv - . unit overview. the phenomenon of

To the teacher: - . this cpo science powerpoint presentation is designed to guide you through the process of presenting

Learning, Memory, and Intelligence - . “the question we have to ask is “is our children learning?’” president

Presentation Tools - . for students and teachers. powerpoint (keynote on ipad) . teacher and student secondary and