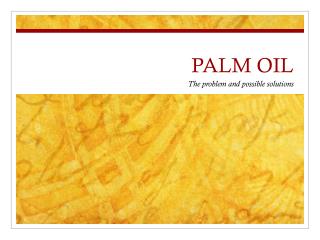 PALM OIL. The problem and possible solutions. What is palm oil?. Palm oil is obtained from the fruit of the African palm oil tree ( Elaeis guineensis) (Schuster et al ., 2007). Source: http://www.environmenttimes.co.uk/news_detail.aspx?news_id=910. What is palm oil?. Palm oil production - Palm oil is the most widely consumed vegetable oil on the planet. according to the world wildlife

Palm Oil Production - . by morgan hyland. how is the energy source being used? . still mostly used in the manufacturing

Over Power Palm Oil - . her home and her family are being destroyed. and she can’t do anything to stop it. but you can.

Palm Kernel Oil Extraction - Palm kernel oil processing machine can be used to get oil from palm kernel. if you want to

Palm Oil and the Environment - . dimi voliotis. what is palm oil?. palm oil is the second most widely produced edible

Plantation Agriculture - Oil Palm Plantation - . a type of farming system. it is an extensive commercial cultivation of