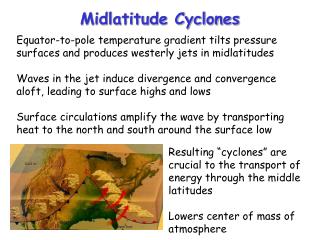 Chapter 10 – Midlatitude Cyclones - . the origin of the theory of midlatitude cyclones. the polar front theory

Cyclones - . what are cyclones?. cyclones are giant, spinning whirlwind storms. in order for a cyclone to be identified

The Midlatitude Cyclone - . cyclone development begins with a stationary front. before birth. forecasting where on the