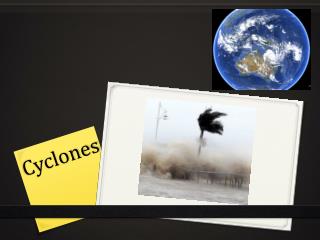 Cyclones. What are cyclones?. Cyclones are giant, spinning whirlwind storms. In order for a cyclone to be identified as a cyclone, it must be travelling over 119 kilometres per hour and it must have been formed over the ocean in a tropical region. Tropical Cyclones - . mostly work within the national oceanic and atmospheric administration in the u.s.a., especially

Tropical Cyclones - . are we at risk?.

Tropical Cyclones - . quiz!. question 1. what temperature does the ocean need to be before a tropical cyclone can form ?

Middle Latitude Cyclones - . by jenny barnes. an introduction:. mid-latitude cyclones are also known as extra-tropical or