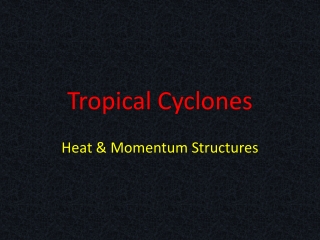 Tropical cyclones and climate - . adam sobel cei katrina workshop. big questions from this year. what made this atlantic

Tropical Cyclones in IFS and NICAM Julia V. Manganello Center for Ocean-Land-Atmosphere Studies - (many thanks to kevin

Another Look at the Use of Maximum Potential Intensity of Tropical Cyclones - . andrea schumacher, cira/csu, fort

Simulating the variability and physics of Atlantic Tropical Cyclones with the Canadian RCM - . louis-philippe caron and

A Case Study of an Outbreak of Twin Tropical Cyclones - . carl j. schreck, iii department of earth and atmospheric

Extra-tropical cyclones in a warmer climate. Will they be more intense? - . professor lennart bengtsson essc many thanks