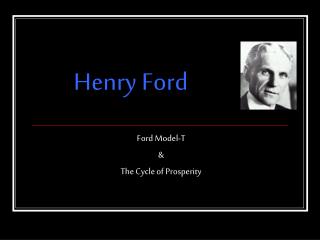 Henry Ford. Ford Model-T & The Cycle of Prosperity. Ford Model-T. In 1908 , Henry Ford built a car which everyone could afford to buy. It was slow , ugly and difficult to drive , and was nicknamed “Tin Lizzie” by the American people. The Ford Model-T. Henry Ford - “the american people made our company, what it is! we have nothing that the public did not give

Henry Ford - . the founder of ford motor company's business failed 5 times and left him broke before his successful auto

Henry Ford - . the first man who was building cars. birth. henry was born in michigan on july 30, 1863. younger times.