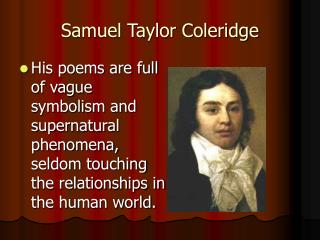 Samuel Taylor Coleridge. His poems are full of vague symbolism and supernatural phenomena, seldom touching the relationships in the human world. I. A brief biography. Unit 7 The Monster by Deems Taylor - . pre-reading questions:. 1. what is a monster in your mind? 2. do you know anyone

Role of management and leadership - . management. writers who consider the functions performed by management frederick

Samuel L. Jackson???s All Natural Mutha F%#@n Hair Growth Seru - This is my take on samuel l. jackson if he had a hair

Kubla Khan by Samuel Taylor Coleridge - . as explored in. kubla khan and orientalism : the road to xanadu revisited by