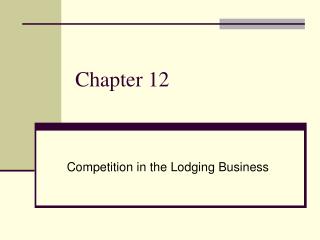 Chapter 12. Competition in the Lodging Business. DEFINITION OF MARKETING. Marketing is “communicating to and giving…customers what they want, when they want it, where they want it, at a price they are willing to pay” (Lewis, 2000). COMPETITION IN THE LODGING BUSINESS.