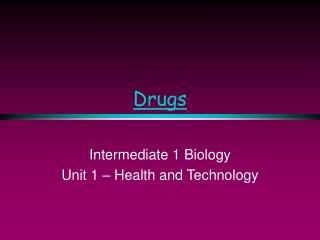 Drugs. Intermediate 1 Biology Unit 1 – Health and Technology. Introduction. Humans have used drugs of one sort or another for thousands of years -wine was used at least from the time of the early Egyptians -narcotics from 4000 BC

Drugs - . by: josh j imison, austin lawrence, hunter ware. drugs are bad mmmkay!. introduction to drugs. there are many