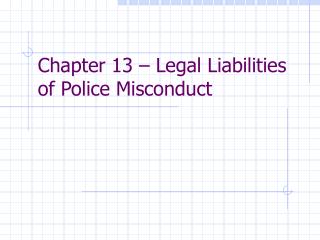 Exonerations with Police Misconduct - . steven nicholas. police misconduct is a problem in many cases. the following are

Presentation on IaCUC Compliance and Research Misconduct May 13, 2011 - . tulane university iacuc and research

Police Reform Efforts to Combat Misconduct - . historical analysis indicates past reforms have too narrowly focused on