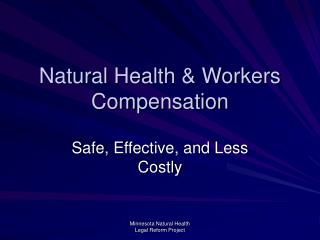 Natural Health & Workers Compensation Safe, Effective, and Less Costly What is Natural Health? Natural health encompasses the use of a variety of modalities that, when used properly, enhances the body’s innate healing abilities.

Health Hazards in Construction - . developed by the division of occupational safety and health (dosh) may, 2011. what

Assistance for Small Businesses and Others: Free Resources for Employers with Latino Workers - . national action summit

The Health Care Employment Market In Egypt - . by dr. mohamed kamal md, quality manager mba, tqmd (auc ). what is the

After the Crisis: Workers Compensation Overview and Outlook for 2011 &amp; Beyond - . business insurance virtual

Designing Compensation and Benefit Packages - . chapter 12. learning objectives. after reading this chapter you should be