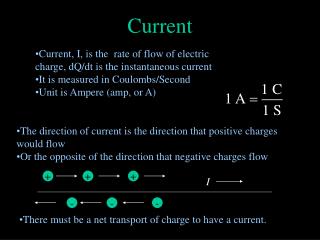 I. +. +. +. -. -. -. Current. Current, I, is the rate of flow of electric charge, dQ/dt is the instantaneous current It is measured in Coulombs/Second Unit is Ampere (amp, or A). The direction of current is the direction that positive charges would flow Current - Comment on neutron yield from becu dump. radcon heard we have a new becu dump. make sure it was documented

Current - . a charge in an electric field is subject to a force. acceleration positive charges move with the field.

Current - . amount of electric charge that passes by a point in an amount of time. unit is called amps # of coulombs each

Alternating Current Versus Direct Current - . by george sereika. dc current. direct current is the one way flow of