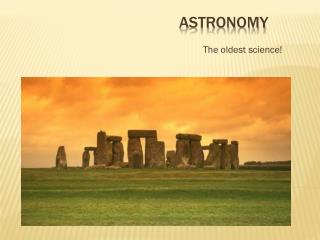 Astronomy in my shopping cart - Today i bought some asteroids, hundreds of black holes and three solar systems!

Unit 1: Astronomy - . “astronomy compels the soul to look upwards and leads us from this world to another.” – plato

History of the Astronomy - . students of 4ºa - eso. madrid - spain. astronomy. astronomy, the law of the stars, is the

A History of Astronomy - . astronomy is the branch of science that tries to know about objects outside the earth