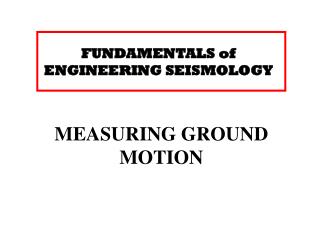 FUNDAMENTALS of ENGINEERING SEISMOLOGY - . locating earthquakes. the release of the accumulated elastic strain energy by

Engineering Fundamentals - . session 9. equilibrium. a body is in equilibrium if it moves with constant velocity. a