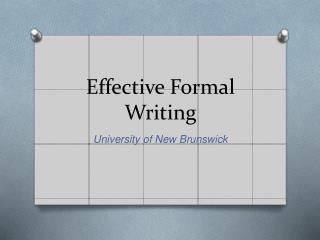 FORMAL WRITING - . why?. to thank to apologise to enquire to complain to apply to inform. thank you letters letters of

Formal Writing - . consumer complaints. after the purchase…you hope to be happy. but, what if…. …things go

Formal Writing - . what is formal writing?. what does the word formal mean? following or being in accord with accepted

Formal Writing Tips - . a variety of ways to improve your formal writing. topic vs. thesis. a thesis is a specific

Writing Formal Proofs - . first points: this is written for mathematical proofs. unless you are doing math econ, formal

Formal Writing Rules - . 1. titles. always include a creative/original title that sets it apart from others do not use

Formal essay writing - . english 12. kwl – formal essays. write down everything you know about composing a formal

Formal Writing 101 - . language goes to prom. why dress up language?. why should we use formal language when writing

6 + 1 Traits of Effective Writing - . ideas. the content of the piece the main theme the message is clear the writer