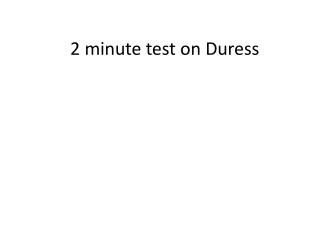 2 minute test on Duress. Write your own definition of a law and a rule on the Whiteboard. Law and Morals. Rule: “a general norm mandating or guiding conduct” Twining and Miers. Law: “the body of principles recognised and applied by the state in the administration of justice” Sir John Salmond Getting Up to Speed with The Six-Minute Solution - . a research-based reading fluency program available in three levels :

Getting Up to Speed with The Six Minute Solution - . a research-based reading fluency program by: gail n. adams and

CPP Exam Preparation Emergency Management - . exam overview :. 6% of exam is based on the “emergency management”