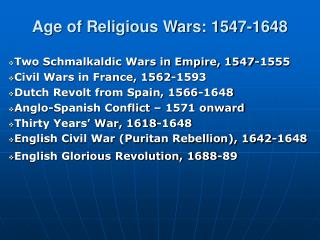 RELIGIOUS WARS 1560-1648 - . many religious conflicts in europe for almost a 150 years after luther, that tore countries

Religious Wars - . the french wars of religion (1562-1598). french concerned with the spread of calvinism calvinists

The Religious Wars - . things get worse. much worse. the religious wars of europe. slaughter in the name of christ. there

French Religious Wars - . john calvin. by 1518, martin luther’s religious ideas had spread into much of france ;