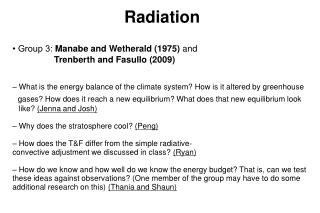 Radiation • Group 3: Manabe and Wetherald (1975) and Trenberth and Fasullo (2009) – What is the energy balance of the climate system? How is it altered by greenhouse gases? How does it reach a new equilibrium? What does that new equilibrium look