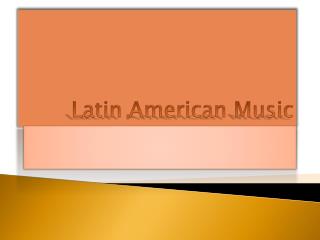 Latin American Music. Argentina/ Uruaguay. The tango is Argentina’s most famous music. Argentine rock was most popular in the 60s and is still the most popular. Uruguay has similar roots to Argentina. Their folk music is indistinguishable from its Argentine counterpart. Bolivia. LATIN-AMERICAN MUSIC AND CULTURE - . ben derosso music 1040. where is latin-america?. latin-america includes all the