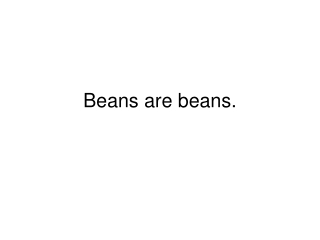 Beans are beans. First thing first ( excusatio non paetita ). Three evidences I had to deal with… Heinz beans are widely unavailable in in Italy There’s a very low consumption of canned beans There were no researches available on the web about the beans-related habits worldwide. This said…. Entity Beans - . by james kinkel chris bagley. introduction. javabeans a java bean is a software component that is

Session Beans - . a session bean represents a single client inside the j2ee

Jelly Beans - You should get jelly beans because there colorful and sweet. you can get them for a low price. you can git

Cacao Beans - . by samuel madafiglio. where did the cacao beans originate . cocoa been originated in the amazon in