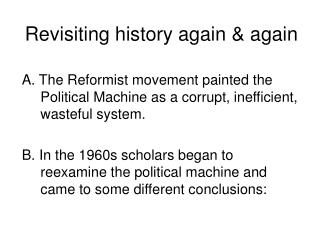 Revisiting history again & again. A. The Reformist movement painted the Political Machine as a corrupt, inefficient, wasteful system. B. In the 1960s scholars began to reexamine the political machine and came to some different conclusions:. 1. Provided needed social services QOF- for beginners - . revisiting the basics april 2007. what is it??. quality &amp; outome framework links