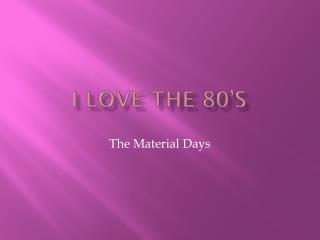 I love the 80’s. The Material Days. 1980 Election. Carter loses in Nov. Reagan is sworn in. The Conservative Coalition. Reagan brings in a conservative era Conservatives opposed equal rights, abortion, and in some cases integration Goals: 1. Shrink the size of the government What I loved in the 80’s - . through the timeline. john lennon assassinated assassination attempt on the pope sally

Music Of the 80’s - . rock . just plain rock is right in between metal and soft rock its not too heavy but its also not

THE 80 s - . the time of change. culture. great economic and social change in many countries nuclear weapons were a big

Throwback to the 80’s! - . created and presented by ms. steinmetz. how many characteristics can you list about the