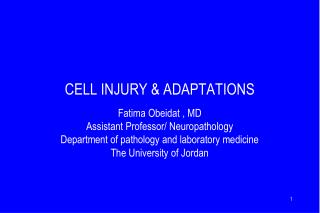 Adaptations (3) - . how do plants and animals survive? how do they adapt to survive in their habitats?. adaptations (3).

Case Discussion: Cell Injury - . at the end of the case discussion, the involved group is requested to submit a report of

Stayin ’ Alive: Animal Adaptations - . what are adaptations?. adaptation - a special trait that helps an organism

Adaptations for survival 1 - . el: to see what we already know about adaptations and begin learning about different types

Adaptations in the Marine Biome - . adaptations to the marine biome. over time, organisms in the oceans have developed