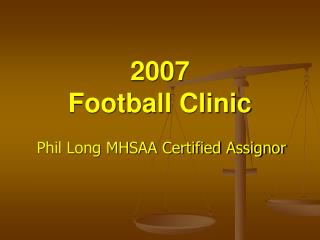 2007 NFHS Football Rules Interpretations - . meeting of 23 august 07. our mission. review a situation from you tube

2007 All-State Tuba and Euphonium Clinic - . presented by dr. jeffrey funderburk with members of unituba studio including

Football - . by: luis ramos. offense. offense is where the players try to score a touch down. defense. defense is were

Football - . f ootball in the world. in the world ,a lot of people play football but only one player wins the golden