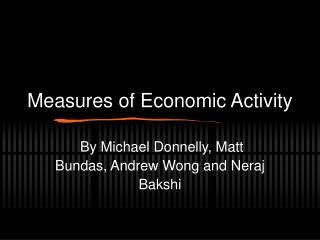 Levels of Economic Activity - . table of contents. 1. draw a line underneath your economics page. 2. write the title

Economic activity of population - . aim of eap indicators. conception of ilo has aimed to offer rates and indicators of

Types of Economic Activity - . primary : extraction or utilization of natural resources secondary : the processing and