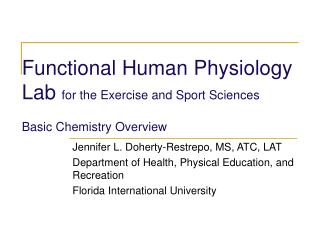 Chapter 1: Nature and Scope of Physical Education, Exercise Science, and Sport - . what is “contemporary physical

Comparative Digestive Physiology - . back in the day…. digestion is simply breaking our food into its most basic

Overview of Anatomy and Physiology - . anatomy: the study of structure subdivisions: gross or macroscopic (e.g.,

Chapter 7: Exercise Physiology and Fitness - . what is exercise physiology? what is the role of physical activity and