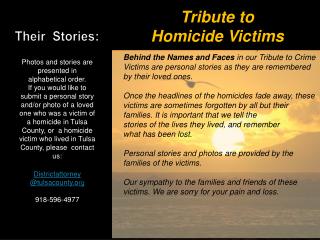 Their Stories:. Tribute to Homicide Victims. Behind the Names and Faces in our Tribute to Crime Victims are personal stories as they are remembered by their loved ones. Life Voyages: Stories of Breast Cancer Survivorship - Why write a book? do we not all ask ourselves: could i face

How I taught my grandmother to read and other stories - . sudha murthy.

Writing for Recognition - . writing for recognition promoting volunteers and volunteerism. sniff out, fetch and

The Functions of Illustrations in Picture Storybooks - . adapted from childen ’ s literature, briefly, by tunnell

There are always other stories: At Least 15,000 Years of Habitation in North America, Part 1 - . today’s archaeologists

Greek Myths and Stories - . chapter one: the gods of greece. this chapter can also be titled as the origin of greek gods