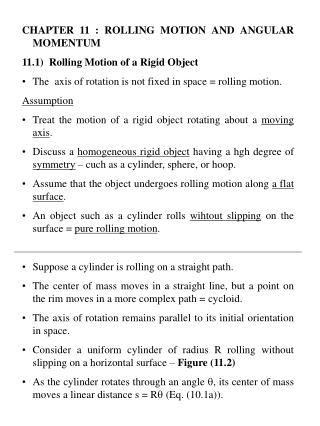 CHAPTER 11 : ROLLING MOTION AND ANGULAR MOMENTUM 11.1) Rolling Motion of a Rigid Object The axis of rotation is not fixed in space = rolling motion. Assumption Treat the motion of a rigid object rotating about a moving axis . Rolling Motion of a Rigid Object - . ap physics c mrs. coyle. for pure rolling motion there is “rolling without

Chapter 11: Motion - . section 11.2 speed and velocity. speed. speed is the ratio of the distance an object moves to the

Chapter 11 - Motion - . how do you perceive motion?. can two people look at the same object and only one of them see the

Chapter 11: Motion - . what are some things we need to know to describe something or someone’s motion?. how fast am i

Chapter 11: Motion - . section 1. measuring motion. key i deas. what is frame of reference? what is the difference

Chapter 11 Rolling, Torque, and Angular Momentum - In this chapter we will cover the following topics: -rolling of

Chapter 11 Motion - . distance and displacement speed and velocity acceleration. (i) choosing a frame of reference to