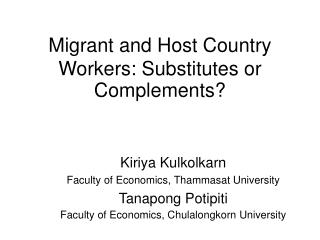 Strategic Substitutes and Complements - . a big theme. commitment can either help or hurt you. figure out which. soft vs.

MIGRANT WORKERS AND FORCED LABOUR - . modern forms of fl. linked to the processes resulting from globalisation, have

Migrant Farm Workers - . a day in the tomato fields immokalee, florida. workers are typically picked up at a local market

Migrant Workers - . during the 20th century, hispanic americans — the majority of whom were mexican americans — made

Substitutes and complements - . with groceries …. essential question. how do the laws of demand interact to establish

Migrant Workers in Romania - . migrant workers – legal aspects. foreign citizens from the eu/eea are able to work in