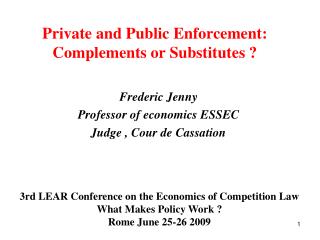 Public Enterprise and Privatization: An Introduction and Overview - . admn /826 public enterprise, privatization and

Oligopoly Theory (5) First -M over and Second-M over A dvantage - . aim of this lecture (1) to understand the stackelberg

Strategic Substitutes and Complements - . a big theme. commitment can either help or hurt you. figure out which. soft vs.