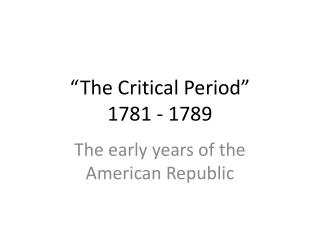 Foundations of Critical Thinking - . critical thinking. what is it? why is it important? how does it improve teaching and

THE CRITICAL AREAS ORDINANCE - . department of development and environmental services. overview of the cao package harry

The Age of Enlightenment - . 1700-1789. the age of enlightenment. a period of intellectual exchange in europe during the

CRITICAL THEORY AND HABERMAS - Critical theory. critical theory was that defined by max horkheimer of the frankfurt