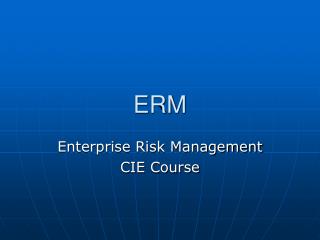 ETSI ERM - . etsi erm. task group activities erm has a number of task groups which are set up on a short-term basis to

ERM Advanced Telematics - Is an electronics company focused on the design, development and manufacture of innovative

Implementing an ERM - . jared howland brigham young university may 18, 2006. what is an erm?. erm: electronic