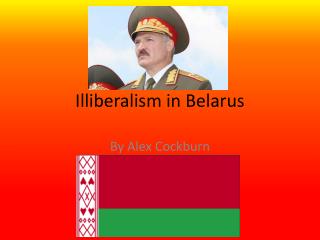 Illiberalism in Belarus. By Alex Cockburn. Government. On paper Belarus is labeled a Republic In reality it is in fact a Dictatorship, fronted by President Aleksandr Lukashenko. Who has been in power since July of 1994 Illiberalism in Ukraine - . by mason f. type of democracy. republic originally based on weimar republic. current

Illiberalism in Egypt - . by nicole bork. following a 2011 uprising, egypt has been attempting a transition from