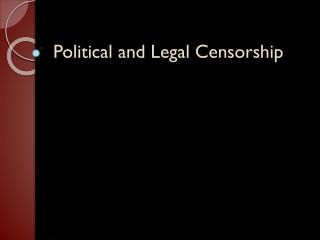 Political and Legal Censorship. What is political censorship?. Political censorship exists when a government attempts to conceal, distort, or falsify information that its citizens receive by suppressing or crowding out political news that the public might receive through news outlets. The Political Frame - Chapter 9 power, conflict, and coalition politics in organizations leaders are naieve and romantic

Mohammed and Political Islam -- Is It Something We Should Worry About? - . prepared by lyle b. mccurdy, ph.d. (rev. 3)

Political Theory To 1789 - . roots of modern political thought. i. the ancient politics of virtue: plato vs. aristotle.