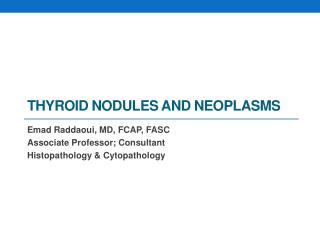 Thyroid nodules and neoplasms - . thyroid gland. objectives: the student should: know the definition of a solitary nodule

Diagnostic approach to and treatment of thyroid nodules - Patient one. a 27-year-old secretary came for her annual

Thyroid and Anti thyroid drugs - . role of the thyroid gland. participates in normalizing growth and development and