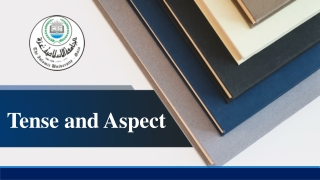 Tense and Aspect. Tense and Aspect. Prepared by: Wahhaj Abulehia Submitted to: Professor Walid Amer 2 nd Mar. 2019. Objectives. Students are expected to: have developed theoretical and practical knowledge in tense and aspect in terms of both English and Arabic. Verbal tense and aspect - . what is tense?. in grammar , an inflected form of a verb indicating the time of a narrated

Tense/Aspect Chart - . adapted from: the grammar book , by celce-murcia &amp;

The Tense and Aspect System - . eunseok ro. formal characteristics of the tense-aspect system. distinction between tense

“ What Grammatical Profiles Reveal about Tense, Aspect, and Mood in Russian ” - . laura a. janda and olga

Together at Last: How Tense and Aspect Interact in Simulation Semantics - . the problem. aspectual theorists have

Variation in the verb phrase: tense, aspect, voice and modal use - . longman student grammar of spoken and written

Past tense and Future tense - . in order to indicate the past tense in potawatomi we add gi behind the pronoun and before