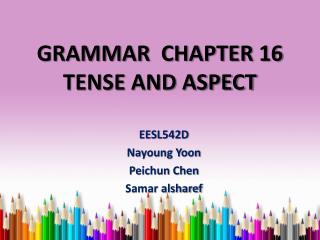 GRAMMAR CHAPTER 16 TENSE AND ASPECT. EESL542D Nayoung Yoon Peichun Chen Samar alsharef. tense and aspect. 1. Tense in verb expresses time. It is referenced to the moment of speaking. It has three dimensions: Past present future Verbal tense and aspect - . what is tense?. in grammar , an inflected form of a verb indicating the time of a narrated

Tense/Aspect Chart - . adapted from: the grammar book , by celce-murcia &amp;

The Tense and Aspect System - . eunseok ro. formal characteristics of the tense-aspect system. distinction between tense

Grammar: Present perfect tense - . go over the news story on page 2 and find the sentences using the present perfect

Grammar Bellringer #16 - . sentence &amp; fragments. sentence vs. fragment. a sentence is a group of words that does