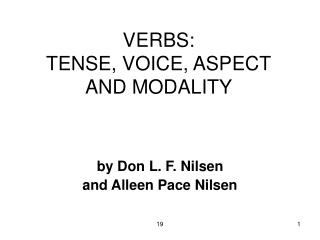 Main Verbs and Helping Verbs - . © brent coley 2008 | www.mrcoley.com. in some sentences, the verb is one word . bill

Deponent Verbs: Overview - . latin, like english, has two verbal voices : active and passive. we have learned that latin

Tarea 9.2 - . verbs that change meaning in the preterite. 1 completar complete these sentences with the preterite tense

A Guide to Past Tense Verbs - . presented by delora, kathy, and clarine. the word &quot;tense&quot; comes from