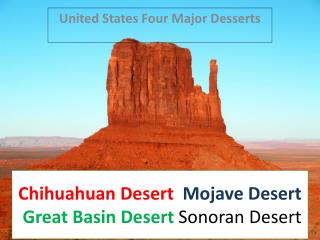 The Chihuahuan Desert - . by marcela covarrubias. what is the chihuahuan

The Mojave Desert - . by emily cordle. biomes. a biome is a large geographical area of plants and animals that have

DESERT - . the desert usually does not get much rain fall . by shelby and jack. location. the yellow is the deserts. the

desert - Lexx.a.smith. desert. characteristics. when you think of deserts do you think of a dry hot endless sea of sand

Desert - . by: kazden johnson. plants. the joshua tree is another plant that lives in the desert. cacti are a type of

Desert - . raquel williams and india eppes. about the desert. hot and dry low down plants animals have to burrow

Desert - . by: shaeel al-attiya. about the