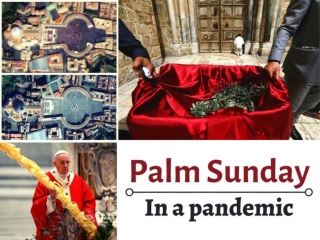 Palm Sunday in a pandemic

Christian faithful, who normally congregate to celebrate the beginning of Holy Week, stay away from St. Peter's Square, Jerusalem and churches around the world during the spread of coronavirus.

Palm Sunday in a pandemic

Pandemic Preparedness - . considering the needs of employees with disabilities during a pandemic flu outbreak job

Basics of Avian and Pandemic Influenza - . the pandemic clock is ticking… we just don’t know what time it is. will

EASTER - . palm sunday. on palm sunday jesus went to jerusalem on a donkey, not a posh horse, a donkey. they kept saying

Palm Sunday Symbols (Matthew 21:1-17) - . jerusalem is symbolic of peace and prosperity. jesus riding on a donkey is