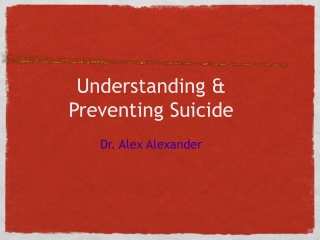 SAVING LIVES: Understanding Depression And Suicide In Young People – A Training For School Personnel - . sponsored by

Mental Health: Ch 11 Preventing Suicide - . eq: how do you identify a suicidal person and get them help?. suicide: the

Alexander the great - . alexander’s personality, military leadership and political objectives become the center of an

Preventing Youth Suicide - . what to know. what to do. john stone and becky sandhaus. goals for this training. present